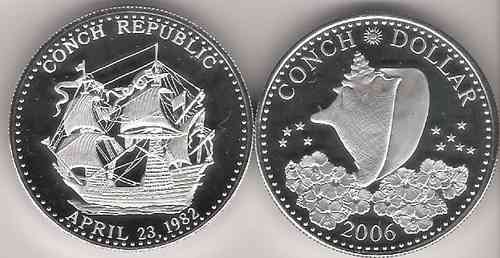 The Conch Republic was founded in the early 1980s by business owners annoyed by the negative commercial impact of a roadblock established at the entrance to the Florida Keys by the US Border Patrol in an effort to curtail the alleged transport of narcotics and illegal immigrants to the US mainland. The resulting 20 mile-long traffic jam proved a deterrent to visiting tourists, and on 23 April 1982, the citizens of Key West seceded from the Union, hoisted their flag, declared war on the United States, and then quickly surrendered - in order to qualify for "foreign aid" to rebuild their shattered economy. The unique form of this political protest captured national attention, forcing the removal of the roadblock, and more than two decades later the anniversary of the Conch Republic's founding remains a cause for annual celebration.